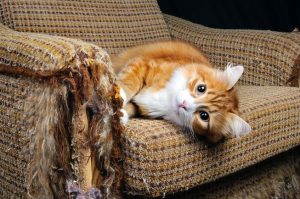 Is your cat scratching up your furniture? Many people who own cats can vouch that their cats have four appendages that most know how to use to efficiently destroy the furniture in the humans home or the human’s other belongings.  Every now and then, I am faced with doing a declaw on some our furry feline patients.  Not only can they be pricey, but it can be one of the more tedious and frustrating surgeries with some possible complications arising.

Cats mark their territory by scratching, much like dogs urinate to mark their territory. Cats have scent glands on their paws, so when they scratch, they leave it on that area.  This also marks visually by leaving the shredded material behind as evidence and displaying dominance to other submissive cats. Scratching also allows the cat a way to exercise and stretch along with removing their old sheaths.

So what are some alternatives that owners can try to avoid having the declaw surgery which is actually an amputation of the bone at the distal joint?  Well, a person may supply their pet with a scratching post or pads to develop healthy scratching habits.  By applying catnip or treats, you can attract them to their designated scratching areas.

A no cost procedure would be to trim their nails every one to two weeks.  This will cut down on the need to scratch as much. This is easiest to do if you start when they are kittens.

There are double-sided tapes that can be put on furniture that is unpleasant for cats. The use of pheramones like Feliway sprayed on the tape can also reduce the cat’s desire to scratch.

Lastly, there are nail covers like Soft Paws to place over the nails.  They are only temporary, so they will need to be changed regularly as the nails grow.

To avoid the destructive behavior of cats, cat owners must be willing to invest time and money.  If not, there is always the surgical route one can go.  If you need advice or help with this or any other issues, please don’t hesitate to call us here at the Olsen Veterinary Clinic.  The phone number is (618)-656-5868. 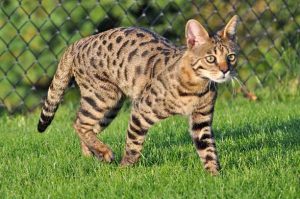