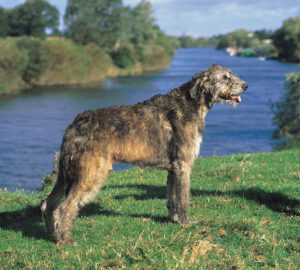 For this next breed spotlight, I will be introducing you to the Irish wolfhound, likely for the first time. This dog is calm, dignified, and the tallest breed of dog (sorry Great Danes). Early ancestors of Irish wolfhounds were fearless, big-game hunters who could dispatch a wolf in single combat. Today, they are the most serene and agreeable of companions.

The amiable Irish Wolfhound is an immense and muscular hound. They are built along classic Greyhound lines, capable of great speeds at a gallop. A male might stand nearly three feet at the shoulder and can weigh up to 180 pounds. Females will run smaller but are still a very large dog. They have a rough and hard coat that can come in many colors. They can be white, gray, brindle, red, black, and fawn. Irish wolfhounds are way too serene to be fierce guard dogs, but the mere sight of the size of these dogs are enough to deter intruders. Irish wolfhounds are characteristically patient with kids, but their size does require supervision when they are around small children.

The history of this wolfhound goes back to the breeding of indigenous large dogs of Britain to the Middle Eastern coursing hounds that were bartered around the known world in the earliest days of international trade. By the time the Roman Empire had gained a toehold in the British Isles, the giant hounds of Ireland were already long established. In the year 391, the Roman consul received a gift of seven of these hounds that “all Rome viewed with wonder”. These majestic hunters, whose motto was “gentle when stroked, fierce when provoked”, were used on such quarry as the now-extinct Irish elk, a massive, ferocious beast said to stand six feet at the shoulder. In 15th-century Ireland, wolves were overrunning the countryside. The Irish hounds, already renowned big-game hunters, began to specialize on wolves. By the late 1700s, when wolves and other big-game animals of Ireland were hunted to extinctions, Irish wolfhounds lost their job and nearly went extinct themselves. This is a case of a breed doing its job too well for its own good. In 1862, British army captain George Augustus Graham began scouring the country for remaining specimens of Ireland’s national hound. Graham made it his life’s work to protect, standardize, and promote the breed. Today, his name is still spoken with reverence wherever Irish wolfhound fanciers gather.

The coats of Irish wolfhounds have two layers; the outer being harsh and wiry with the under being very soft. They shed throughout the year, but not in an excessive amount. Unlike many other double-coated breeds, Irish wolfhounds don’t “blow out” their coats during an annual or semi-annual shedding season. Irish wolfhounds retain a strong instinct to hunt and chase prey, so they should only be allowed off the leash in areas that are securely fenced. As adults, Irish wolfhounds can become couch potatoes if allowed to, but regular exercise like long walks and play sessions help keep them physically and mentally healthy. A home with a large, fenced area is necessary to provide the environment needed for this breed to thrive. The breed can also exercise mind and body by participating in canine sports like tracking, agility, and lure coursing.

These gentle giants are sure are a breed with a rich history. Their ancestors’ traits reveal themselves with their passion for hunting and need for mental and physical exercise. Generally, these dogs make excellent companions for anyone with enough land to satisfy their need to run. With any questions, please feel free to contact Dr. Olsen at 618-656-5868.