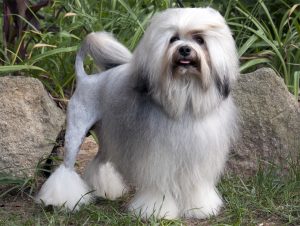 The month of February is reserved to spotlight a dog breed.  Most of the time, I try to shed some light on a breed that isn’t very popular.  Well this month is no exception as I am featuring a dog that is not very popular, unique in its appearance, rich in history and really considers its only job as being a companion for its owner. That breed is the Lowchen, which is also known as the “Little Lion Dog”.

The Lowchen is a small breed that generally stands about a foot tall but has an enormous heart.  The coat is traditionally kept in a “lion clip” in which most of the hind quarters and tail are clipped down close to the skin.  The overall effect is that of a mini lion with a full mane and plumed tail. This breed coat comes in many colors and color combinations.

The breed has a long and somewhat controversial history.  We know from works of art depicting images of small dogs in a very distinctive lion trim from the breed dated to the 16thcentury.  The breed has been depicted throughout the centuries in paintings, drawings and tapestries from around the world.

The controversy arises as to the exact origin of the breed.  There are several theories of debate with one thinking that the breed originated in Northern Europe which is now known as Germany, France and Belgium.  Because it came from this area, the Lowchen is thought to be tied to the breeds that were the forerunner to the modern day poodle.  The stories go that they were a favorite companion for the ladies of the castles and they would lay close to their owners at night to keep them warm like a water bottle, as well as attract the fleas away from the owner.

Another theory is that the Lowchen originated in the Mediterranean region and are directly related to the Bichon breeds.  Also there are some theories that the breed might have originated in Russia or Tibet.

The Lowchen has been a resident of all households through the ages, from castles to farmyards and cottages.  Aside from the function of being a companion, they possibly were varmint hunters and fierce little guards.

There is a story from the late 1700’s about a Lowchen whose name was Bijou.  As the story goes, Bijou was so upset that his owner was leaving him behind, he jumped out of  a castle window into the Lahn River that was 60 feet below.  One ending has him surviving and was rewarded by riding to the hunt in the owner’s saddle, the other that the jump ended in disaster.  Whichever the outcome, his portrait from 1787 still hangs in the Baronesses’ bedroom in Wellburg Castle.

Little has been written about this breeds early years.  The first record of a breeder and fancier was Dr. Walthier in Germany in the 1800’s.  The breed standard was written in the 1800’s and in 1897, a Madame Madelaine Bennert purchased her first Lowchen.  She is the one who would be recognized for her efforts in saving the disappearing breed.

In 1999, the Lowchen was admitted into the AKC in the Non-Sporting group. The Lowchen is a small breed that weighs about 15 pounds and has a life expectancy or about 13-15 years.  It is a very loving dog whose sole purpose is giving love and hoping to get loved in return. It might see a squirrel, chase it and catch it, but it would not know what to do with it if it did catch it. It will bark at strangers, but then when they enter, the Lowchen will lick them to death.  The Lowchen’s favorite spot to be is on the couch watching out the window.

Don’t mistake the breeds sweetness, because it is a true lion that will stand up to any German Shepherd and bark down a Great Dane.  They are active, smart, and love children.  They can make very good agility dogs because they are trainable, resourceful and very adaptable.  Since they like to bark, it is recommended that they undergo some obedience training. Due to their haircoat it is advisable that they be brushed regularly and see an experienced groomer monthly.  Another plus with this breed is that they are hypoallergenic.

There are very few health problems with this breed.  But they may suffer from patellar luxations, heart issues and some eye issues.