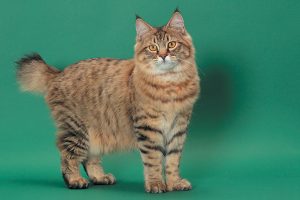 Dogs are considered “man’s best friend.”  But what do you get when you don’t have room or time for a dog? How about a cat that thinks it’s a dog? The breed of cat that I am spotlighting this month has been described as that.  It is called the Pixie-Bob.

The Pixie-Bob breed is thought to be the result of the natural mating between a bobcat and a domestic shorthair, but they may also have sprung from a natural genetic mutation that gave them their wild look and bobbed tail.  It is one of those mysteries that no one will ever know for sure. This breed was first developed in the Pacific Northwest in the mid 1980’s by a woman that acquired a male kitten with distinctive characteristics like a spotted coat, a short tail and more than usual numbers of toes.  A year later, she acquired another male cat with a short tail and with the help of a neighbor’s female cat, produced a litter of kittens.  One, a female, had a muted spotted pattern and the woman kept her—naming her Pixie.  The breeder wanted more cats like Pixie, and soon the breed was born.  They were recognized as an actual breed by the American Cat Fanciers Association in 2005.

Pixie-Bobs are described as “big, lively and outgoing.”  The breeds’ devotion to its family belies its somewhat wild look. They tend to be a large cat where the male and female can weigh up to 12 and 25 pounds respectively.  They are brawny and muscular which is why some breeders believe that the Coastal Red Bobcat had to be the founding father. Their ears tend to be tufted and resemble that of a bobcat by having lynx tips on the ears. Pixie-Bobs have a thick wooly coat like a bobcat and can be either long or short haired. They normally have a striped coat pattern and come in a variety of colors, but most are tawny, light gray, or reddish.  Their eye color can be from golden brown to gooseberry green.  A Pixie-Bob’s tail is a minimum of 2 inches by can be as long as to their hock.  Their facial hair grows downward giving them the appearance of a man’s muttonchop sideburns. One other unique feature that some Pixie-Bobs have are that some are polydactyl.  This means that they have more than the usual number of digits on its paws.  Polydactyl cats are considered lucky, so if you own a Pixie-Bob, luck may be on your side.

Pixie-Bobs are inquisitive and like to interact with families, so they are true companions and members of the family because of their relaxed attitude.  They communicate with their families with a pleasant voice and standard meows and purrs.  They are active and enjoy being friends.  They enjoy interaction with families and have been described by some as “the cat that thinks it is a dog.”  Pixie-Bobs love going on car rides and walks just like dogs.  They also get along well with dogs and other pets. Because they tend to be a medium to long haired breed, they do require a weekly brushing to prevent mattes from forming and regular nail trims.

If you have a Pixie-Bob cat or even a good ol’ domestic shorthair, the Olsen Veterinary Clinic tries to meet the expectations for all of your pet’s needs. If you have any questions or issues please do not hesitate to call us at (618)-656-5868.