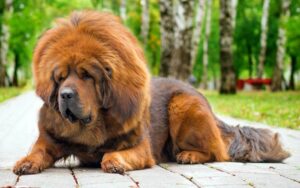 The Tibetan Mastiff is a large-size Tibetan dog breed. It has a medium to long double coat and is found in many colors. These can be solid black, black and tan, various shades of red (from pale gold to deep red), and bluish gray. Sometimes, they can have white markings around their neck, chest, and legs.

The term mastiff goes back to when the Europeans first went to Tibet. They used the term to refer to nearly all large dog breeds in the West. Early Western visitors misnamed several of its breeds through this process. For example, the Tibetan terrier is not a terrier, and the Tibetan spaniel is not a spaniel.

In the early 20th century, the Prince of Wales, George, introduced a pair of Tibetan Mastiffs to the United Kingdom, which caused the breed to become prevalent enough in England to be shown at the Crystal Palace show in 1906. Since 1980, the breed has been gaining in popularity worldwide.

The Tibetan Mastiff is a primitive breed and retains the general hardiness that would be required of them to survive in the harsh environment of Tibet, Ladakh, and other high-altitude Himalayan regions. Because of this, they tend to have strong instinctive behavior, including canine pack behaviors. These help the breed survive in harsh environments. It has maintained many of the same biological processes as wolfs and other animals.

The dog has a long, double coat whose length depends ultimately on the climate. Uniquely, the Tibetan Mastiff lacks the unpleasant big-dog smell that affects many other large dog breeds. Their coat can shed dirt and odors on its own. Many of the dogs shed somewhat throughout the year, but there is generally one great molt in late Winter or early Spring.

Tibetan Mastiffs have a life expectancy of around 10-16 years, but this span can vary. Generally, the breed has fewer genetic health problems than many other breeds. However, cases can be found of hypothyroidism, entropion, ectropion, distichiasis, skin problems, etc. As with most large breeds, some will suffer from elbow or hip dysplasia.

Hypothyroidism is common in Tibetan Mastiffs, along with many other large “northern” breeds. They should be tested periodically throughout their lives using a complete thyroid panel. However, because the standard thyroid levels were established using domestic dog breeds, test results must be considered in the context of what is “normal” for the breed, not what is standard for all breeds. Many Tibetan Mastiffs will have “low” thyroid values, but no clinical symptoms. Vets and owners differ on the relative merits of medicating dogs that test “low” but are completely asymptomatic.

The Tibetan Mastiff is sure to be a large lovable friend for any owner. Feel free to contact Dr. Olsen at Olsen Veterinary Clinic with any questions at 618-656-5868.