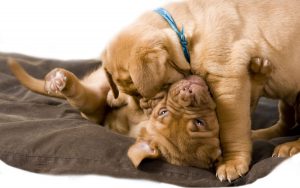 Dogs often wrestle and playfully bite each other. It’s just part of puppy play time. Sometimes, the wrestling turns into a full-blown dogfight. If the fight doesn’t seem to show signs of stopping, it’s important to step in before one of the dogs get hurt.

Most dogfights only last for a few seconds. It’s important to stay calm and clear headed. Resist the urge to grab your dog by the collar. It might be your first impulse, but when dogs are really fighting, they may whip around and instinctively bite your hand without any past aggression. You are able to tell that it’s a real dogfight when the dog’s bodies are rigid. To stop the fight, make as much noise as possible. You can yell, shriek, stomp your feet, clap your hands, etc. Do whatever you can to attract the dogs’ attention. Similarly, you can use water to get their attention. You can douse the dogs with a hose, bucket of water, etc. (If you are going to a new dog park or unfamiliar place, bring a spray bottle just in case a fight breaks out.) You can also use a barrier such as a large piece of cardboard, plywood, even a big stick to split them up. The large barrier acts as a way to split them up without risking your hands. Lastly, you can throw a blanket over the dogs. Some dogs will stop fighting when they can’t see each other anymore.

It’s important to know when you should step in. Scuffles between dogs last only a few seconds and can appear worse than they actually are. Fights involving fighting breeds should be stopped as they have trouble reacting to social signals from other dogs. Fights between dogs of two very different sizes or two females in heat will need to be broken up; as well as fights involving dogs who are known to have done physical harm in the past or will not walk away. Under no circumstances should you get between the two dogs. You can grab your dog from behind and grab the top of its hind legs, so it is in a wheelbarrow position. You can then walk backwards circling to one side so the dog will not be able to turn and bite you. After you stop the fight, be sure to separate the dogs and keep them out of each other’s sight. This prevents the chance that the two dogs may start fighting again.

To ensure that fight never happens, observe how your dog interacts with other dogs. Does your dog bark, pounce, and snap at other dogs? Do they play rough normally? If you know how your dog acts normally, you will be able to know when a fight is getting ready to begin. When dogs play, it often sounds a lot like it does when they’re fighting. Dogs will growl, snap their jaws, and bite one another roughly. Instead of listening, watch the dogs’ bodies. If they look loose and relaxed, and they’re wagging their tails, they’re probably just playing. However, if the dogs’ bodies appear stiff and rigid, and their tails are down, they may get ready to fight. If one dog thinks it is play time and the other isn’t seeing it as fun, it is best to separate them to avoid any fighting. To further prevent fighting, don’t encourage competition. Dogs get territorial over food and toys. Some breeds are more apt to defend their rights to beloved possessions while some are more apt at sharing. Be sure to know your dog’s unique personality traits so that they can prevent a battle from happening when another dog comes around. You can put treats, food, and toys away when your dog is having social time with another dogs and feed multiple dogs in separate rooms.

Preventing fights start from when the dogs are young puppies. Teach them to play nicely. Use positive reinforcement to reward good behavior. When your dog bites, growls, or exhibits other violent behavior, separate them from the dog that they are playing with and put them in time out until she calms down. Similarly, make sure that your dog knows to come when they are called. If your dog is good at obeying your call to come, you’ll be able to pull them out of tense situations before a fight may start.