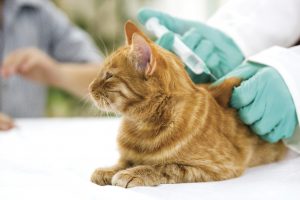 Pet vaccines are important, and they have a long history. Probably the most important technological gains were discovered in the 1790’s by Dr. Edward Jenner. He discovered the first vaccination by giving people a preparation of material from cowpox, which was a common animal disease in cattle. The people that were injected with or “vaccinated” with the material did not get sick and remained healthy when they were exposed to the deadly smallpox virus. Over 100 years later, a French scientist by the name of Louis Pastuer, found that they could protect people and animals from disease by injecting altered forms of microorganisms.

The process of how a vaccine works is a complex reaction that involves many chemical and cellular reactions within and between the immune system cells of the body. Basically the role of the vaccine is to expose the immune system of the pet to viral and bacterial antigens that are contained in the vaccine. In the future, when the pet is exposed to that related organism, the body will recognize it and then activate the immune system to prevent the disease from producing or reducing the signs of clinical disease.

Vaccines can be administered by subcutaneous or intramuscular injections, intranasal or orally. The vaccines that are injected or given orally tend to produce a more systemic or whole body response, whereas the intranasal provides a more local response. Intranasal vaccines can be advantageous to provide a quicker response and prevent or kill the new virus before it can get any further in the body. Local nasal vaccines would not be helpful for a virus that has been ingested and causes intestinal disease such as parvovirus in dogs. For that we would want a vaccine that would produce a more systemic response.

The vaccines that we use in veterinary medicine are most generally either a killed or a modified live (attenuated) vaccine. There are multiple indications for both, but generally speaking the killed vaccines are safer and unlikely to cause disease in the immunocompromised pet. Whereas, the live vaccines provide a more amplified response that leads to a better, longer lasting immune protection. Several of the vaccines that we use have many different viruses in one injection. This allows to vaccinate for several of the organisms in one injection.

To confuse you even more, pets get some protection through the placenta when the puppies and kittens are in the mother’s uterus and when they get colostrum which is the first milk that they drink. This protection will decrease over time and usually will be low enough by 12 weeks of age where vaccinations will start reacting. There is no way to measure quick, easy and inexpensive way to measure the immunity gained here, so we generally recommend starting vaccines at 6 to 8 weeks of age and then booster them every 2 to 4 weeks until they are 16 weeks of age. Generally, it is not the number of vaccinations that they get, but when they get them at their chronological age.

A vaccine helps prime an animal against a specific disease. It does this by stimulating the immune system with a nonpathogenic virus or bacteria. If the animal responds adequately, it will develop cells that will help it to quickly and efficiently fight off the pathogenic form of the agent if it is encountered later. Here at Olsen Veterinary Clinic, we have tailored our vaccination programs to meet the needs of your pet. If you have any questions please feel free to contact us here, or call our office at 618-656-5868.