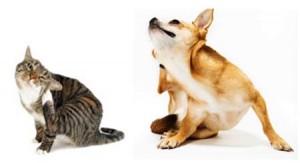 With the spring weather rapidly approaching,  you and your pet are probably excited to get out and explore the great outdoors.  However, lurking in the woods are some old eight-legged nemesis’ that can cause harm to your pets. If your pet is bitten by a tick, it can spread harmful diseases through their bites.

Ticks are parasites that attach themselves to dogs and cats, feed on their blood and transmit diseases directly into the their system. There are many tick-borne diseases seen throughout the United States. Some of the major tick-borne diseases that are seen in the Midwest include:

The key to curing tick-borne disease is early diagnosis and treatment.  Several broad-spectrum antibiotics are generally effective, especially in the early stages of the disease.  Since antibiotics don’t differentiate between the “good” and “bad” bacteria, you may want to add a probiotic to avoid gastrointestinal problems.  Be sure to follow the advice of your veterinarian.

There are numerous products and medications available to prevent ticks on your pet over the counter and from your veterinarian.  No method offers 100 percent protection.  If you have a field dog, they are vulnerable to tick-borne diseases because of the time spent in the tick-infested environment.  So owners should diligent about applying topical and systemic treatments before outings.  It is important to check your pets daily during the tick season and be removed properly if present.  Ticks need to be embedded at least 24 to 48 hours to spread infections, so if checked every day, then the risk of infections being spread are lessened.

Tick-borne disease can rebound rapidly if your pet’s treatment only succeeded in suppressing rather than killing ticks.  Since recurring tick diseases are harder to control or eradicate, don’t relax too soon if your pet recovers.  Make sure that your pet has recovered completely and give it time to get back to recover completely.  To further protect your pet, remain vigilant with regular blood work to detect recurrences.

Finally, to make an informed decision about protecting your pet from tick-borne diseases, talk to your veterinarian about the best tick-control approach for your dog.